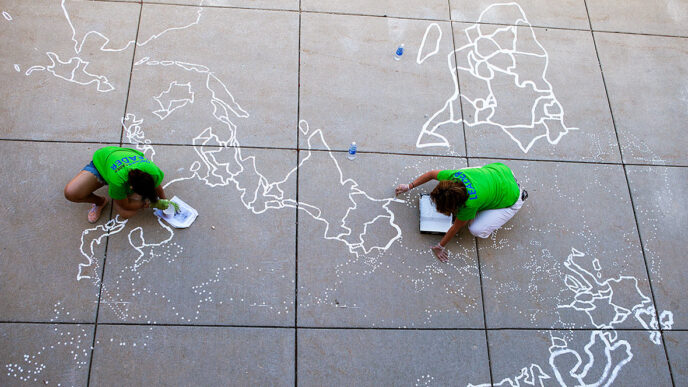 Volunteers painting a map of the world at Deneen Elementary in the Greater Grand Crossing neighborhood on the city’s south side.||||||||||

On Saturday, June 27, 2015, Chicago Cares held its 22nd annual Serve-a-thon, the city’s largest, single-day community service project. Nearly 5,000 volunteers in approximately 300 teams, representing more than 100 companies, took part in the event. We asked some of them why they give back.

In Daley Plaza, we asked Humboldt Park resident Isaiah why he volunteers. He said, “The feeling of giving back makes you feel good.”

Standing near the Picasso in Daley Plaza, mother and son Gretchen and Gabe drove all the way from Indianapolis to join Microsoft’s volunteer team. The middle schooler said he likes giving “because it gives people a place to go and something to do that helps others.”

Showing their support as part of Northwestern Medicine’s volunteer team, mother Germana Sandy and daughter Germy Terrazas from Humboldt Park agreed that “it’s important to help people.” Inspired, Germana added, “I believe we can make changes for our community—especially for those that need help.”

At Brighton Park Elementary on the city’s southwest side, we caught up with Ms. Zupancac and Mr. Cruz. Ms. Zupancac found her calling as a 4th grade teacher in the very school she used to attend as a little girl, bringing her infectious enthusiasm to the next generation: “I have to make learning enjoyable. It’s my passion. If I am not having fun, then the kids are not having fun.”

Alexis, a middle schooler from Schaumburg, joined the PepsiCo team at Bright Park Elementary because, as she said, “My summer’s been boring all month. I want something exciting to do! I thought it would be fun to paint a school. I like to paint and I want to be one of those people that helps others!”

Southside teens (from left to right) Daija, Jacqueline and Heaven worked together at Hammond Elementary in Little Village neighborhood on a detailed mosaic of an eagle, the school’s mascot. Interns with Grosvenor Capital Management, Daija and Jacqueline were joined by their Kenwood Academy classmate Heaven, who wryly replied that she joined her friends for “moral support.”

Catching up with Charles, a resident from Printer’s Row, on a ladder painting the offices at Hammond Elementary in Little Village, we asked him what brought him out. The former New Yorker replied, “I love Chicago—it grows on you. I was a typical New Yorker. Like, New York is the best. But, Chicago is hard to beat when you have days like this; when the weather is perfect, the city is hard to beat. Today is my first time with Chicago Cares, but it won’t be my last.”

Erin, 19, who will be a freshman at University of Illinois at Chicago later this year, first came to Chicago from Vermont to do community service with City Year in Little Village. For this year’s Serve-a-thon she returned to the neighborhood to lead a group of volunteers at Hammond Elementary. “Funny story, I had to email them to waive the age requirement so I could be a volunteer leader. I was really adamant about it. With my experience with City Year, they were like ‘you sound fantastic.’ I am really grateful to have this opportunity—when I got the email, I was really, really excited.”

Streeterville resident Eric (center) came back to the Serve-a-thon for the second year to volunteer with his firm, Grosvenor Capital Management. He said, “The whole environment that Chicago Cares has put together, a big organization with all these people, there is something special about that. To be part of a community, with everybody giving back, on a beautiful day with lots of friendly people—you can’t go wrong. It is so worthwhile, especially (volunteering) with your co-workers. To see your co-workers, who we usually see in their slacks and suits all day, in a different light, it’s a beautiful thing.”