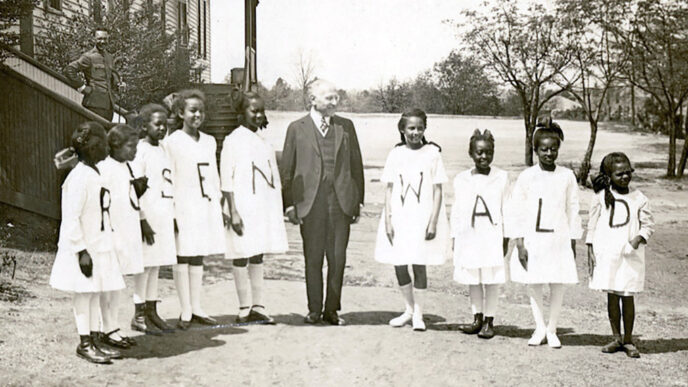 5,000 Schools for Black Students Rise Across the South in ‘Rosenwald’

Chicagoans have good reason to recognize the name Julius Rosenwald. As president of Sears, Roebuck and Co., Rosenwald grew the company to become among the largest and most iconic in American history.

But perhaps his most profound legacy was the Rosenwald Schools: a network of public schools in rural southern communities. Between 1915 and 1932, the schools built through Rosenwald’s challenge grants provided 660,000 African American students with access to education.

The Pee Dee Colored School in Marion County, SC, built in 1922-23. Image courtesy of the South Carolina Department of Archives and History

“Rosenwald was so far ahead of his time in his attitude towards African Americans. And he didn’t start out that way,” explains Rosenwald’s grandson and biographer Peter Ascoli. “In the very beginning he really didn’t know any African Americans.”

Rosenwald’s early philanthropy supported a range of causes, often within the Jewish community. But his social commitments took on a new focus after an introduction to another advocate for education: Booker T. Washington.

“Once he got to know Booker T. Washington, he quickly changed and realized that they were very similar in many respects,” Ascoli recounts. “He came to believe that blacks and whites were equal, and should be treated as equal. In the early years, the 1910s and ‘20s, this was an idea that most white men simply didn’t have.”

More than 5,300 schools were built by the time of Rosenwald’s death in 1932. However, this history remains little-known—largely because Rosenwald directed that the charitable initiative should end when he died, and the schools cease to bear his name.

Map created by the Julius Rosenwald Fund shows the location of the schools throughout the southern states. By 1928, one in every five schools for black students in America was a Rosenwald School. Image courtesy of Fisk University, John Hope and Aurelia E. Franklin Library

“His was the first major American foundation to go out of existence voluntarily,” says Ascoli. “That was his real contribution to philanthropy: the notion that a foundation didn’t need to stay in existence forever. He firmly believed that each generation should spend its own money on the causes that it believed in.”

Although the schools—and in many cases, the entire towns that housed them—have ceased to exist, their impact on families remains profound. By making education available to those who had been systematically excluded, the schools gave entire generations an opportunity to access a wider future.

In 2002 the National Trust for Historic Preservation placed Rosenwald Schools on the 11 Most Endangered Historic Places list and launched a restoration initiative. Efforts to refurbish the buildings have reconnected communities, inspiring reunions of alumni and family.

“Just as you needed a spark to form the original school, so you need someone who is an alumnus or alumna of one of these schools who says, ‘I love this school and I don’t want to see it die or disappear. We’ve got to save it,'” Ascoli says. “So history is sort of repeating itself. Whole generations afterwards are invested in this story, even if the building isn’t there. It’s truly amazing.”

The Chicago Community Trust is proud to highlight this chapter in philanthropic history, supporting the film’s Chicago premiere on Thursday at the Museum of Science and Industry. Rosenwald will run from September 4-10 at Century Centre Cinema. It will continue opening across the country in select theaters throughout the fall.