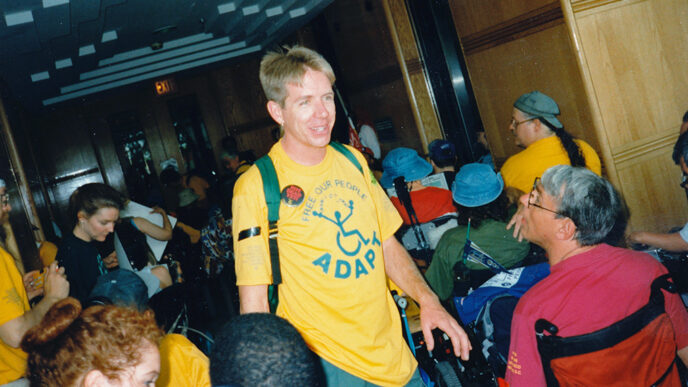 Kevin Irvine demonstrating with ADAPT for home-based services in Houston during the 1990s.|

For the 21st century generation, it must be hard to imagine how anyone could manage with the restrictions on basic living that preceded the Americans with Disabilities Act, enacted in 1990.

In 1993—during those early post-ADA years, when I began learning about disability rights and the independent living movement—access barriers were often huge: lack of basic public transit accessibility, up to two weeks notice to arrange paratransit in some cities and more.

Businesses and governments were in the earliest stages of recognizing their responsibilities to provide equal access to programs and services. In the 1990s, many deaf and hard-of-hearing people had difficulty even obtaining access to the equipment needed to make a simple phone call, even after the TTY-relay network made it more possible. Voice-activated computer programs were in their earliest incarnations and challenging to use, at best.

As the efforts that led to the ADA’s passage shifted to implementation and enforcement, barriers began to fall, and every new access victory allowed us to set our sights higher and adjust our dreams and goals accordingly.

So as we celebrate the 28th year of the Americans with Disabilities Act, ask yourselves, “What can we do to reduce the barriers that still exist?”

Especially, those who have benefited from decades of advocacy and activism should consider what they can do to ensure that no one is left behind.

Kevin Irvine in summer 1990, demonstrating with ACT UP in Providence, Rhode Island during a visit by President George Bush.

I think that leveraging existing technologies, by looking at how technology can afford and expedite accessibility, is one way to reduce barriers. Look at video content: it’s everywhere in our personal and professional lives. But the rapid growth of videos throughout the last decade has not been accompanied with commensurate accurate captioning. I believe that open-captioning of all videos should be best practice: Next time you see a video, turn on the captions, and if they don’t exist or aren’t accurate, let the video creators know.

We should also recognize that our movement has always been strongest when people with different disabilities have united to understand and challenge barriers encountered by all, and I think we must continue to build intersectional coalitions both within and outside the disability community.

Over the last couple of years, in Chicago, we’ve seen efforts to ensure accessibility at marches and rallies, where people with and without disabilities, united around a cause, model how to create inclusive events for organizers around the country. This must continue to be the standard; inevitably, if you look around your world, you can find ways to use your privilege (earned and/or inherited) for equality and equity.

As we continue to raise our sights even higher, we must fight for more. Let’s all move far beyond the floor promised by the ADA to bust through the ceiling of our post-ADA world.