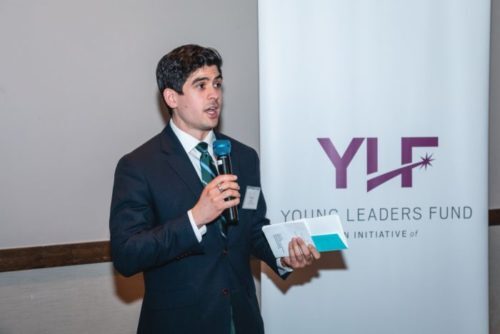 “A group of young adults wanted to invest in our greater community and work with peers to achieve this goal,” said Virginia F. Ojeda, a former chair of The Chicago Community Trust Executive Committee. “Many stepped forward, and the Young Leaders Fund (YLF) grew directed by these young individuals. I think their vision and unselfishness has made Chicago grow as a city that cares.”

Ojeda was among the co-founders of YLF, established in 1994 with the support of matching grants from the Elizabeth Morse Charitable Trust and The Chicago Community Trust. YLF is the first of six affinity funds the Trust would establish as giving groups to inspire philanthropy and civic leadership and support nonprofit organizations. This year marks YLF’s 25th anniversary of grant making.

Today, YLF is co-chaired by Tomás de’ Medici and Adam Seidenberg. Tomás’s parents, Bruce de’ Medici and Rita Enriquez de’ Medici, were also founding members of YLF. And while their commitment to social issues inspired Tomás’s leadership, he forged his own path to becoming a part of YLF.

“While the Trust was always something I was aware of, my folks only mentioned The Young Leaders Fund once or twice as I got involved, but it was never presented as ‘this is the established legacy’,” said Tomás. “It wasn’t until I’d been a leader for two seasons that they gave me the full details, and I appreciate that. They let me find my way to it, and I am grateful to be a part of the larger continuity.”

The trio was drawn to YLF for a variety of reasons. Chief among them was the fund’s ability to gather diverse voices to make decisions and provide resources to innovative Chicago organizations. Becoming members of the fund provided an opportunity “to investigate and fund worthy startups,” said Rita.

As a family, the de’ Medicis value supporting charitable and philanthropic endeavors. Throughout his legal career, Bruce has provided advocacy and legal assistance to individuals with learning disabilities, with a particular focus on special education law. He has specialized in bankruptcy and restructuring. His current focus is A.I., next-gen drone technology, and cyber security.

Rita is a former social worker who has worked in preventive substance abuse programs and with survivors of domestic violence. In her career she has always enacted her values around increasing representation, serving as the Transition Director of the National Network of Hispanic Woman, and as a board member of the National Women’s Political Caucus.

Tomás advises on early stage solar project development, philanthropy, & sustainable branding through his firm, TdM Emerald Corp. He served as chair of the Environmental Law & Policy Center’s Next Generation Advisory Council and is the founder of The Chicago Sustainability Series podcast. He is completing a Clean Energy Leadership Institute Fellowship, and in the fall he will start graduate school at Northwestern University’s McCormick School of Engineering to earn a Master of Science in Energy and Sustainability.

YLF is an endowment fund that provides its young professional members with hands-on training in grant making and funds innovative organizations that address critical needs in Chicago. The fund focuses its grants on arts and culture, community and economic development, and child development and education.

The theme of YLF’s 25th-anniversary campaign is “25 Years Young.” The goal of the campaign was to commemorate the legacy of YLF as well as grow its endowment, and the Trust  committed to a matching grant of up to $25,000 to support this effort. The successful campaign resulted in $48,205 in grant support to 12 Chicago non-profits with focus areas of Arts & Culture; Child Development & Education; and Community & Economic Development.

Of these 12 grants, in response to the COVID-19 pandemic and in recognition of the historic Black Lives Matter marches, YLF provided three additional Special Grants to support urgent needs in the community. In addition, YLF will start a Fellows program in which former grantees are able to put forth community members and staff to fully participate in upcoming YLF cycles. This initiative will focus on underrepresented populations in philanthropy, equipping grantees to become grantmakers.

“In times of crisis, it is tempting to just focus on the flashpoints, but the issues we are seeing highlighted now are tied to historical and structural needs. I am grateful that YLF was in a position to craft grants that both responded to the immediate and provided for long-term capacity building because of our strong team,” Tomás shared.

Each season YLF interest groups conduct site visits, interview staff, and evaluate grant requests. Each group selects 15 to 20 organizations that best fit the guidelines of the fund. As a collective, YLF reviews the selections and determines which of the organizations would be best suited to receive a grant. Grants are awarded in early June.

“I was happy to participate with the Young Leaders Fund and be a part of the drive to the fundamental premise of it, which is let’s bring our resources together for organizations that can benefit from what we can bring,” said Bruce.

Since its inception, YLF has given more than $1,000,000 to more than 250 entrepreneurial nonprofit organizations in Chicago. The fund’s impact extends to the skills it has instilled in its members. YLF has emerged as one of the most significant young professional funds in the nation and is the first of its kind to institute a hands-on philanthropy model for its members.

Tomás is ushering the fund into a new era where he hopes to continue the fund’s central tenet: to provide resources to community-based nonprofits that are doing the work to address relevant social and cultural issues. Though Bruce and Rita are no longer members of YLF, their influence and legacy are still reflected through Tomás’s leadership.

Said Rita of her son, “He’s very thoughtful and careful with his words. When he makes a decision, it’s because he’s put that thought and process together. He’s very good at developing leaders and helping them grow.”