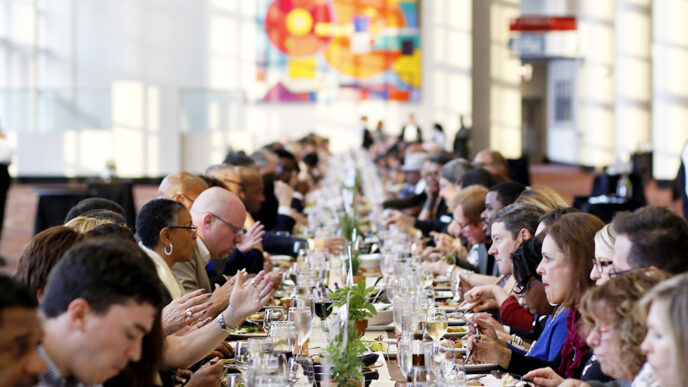 Mealtime conversations to focus on resident commitments for improving their communities

CHICAGO – February 5, 2015 – The Chicago Community Trust today announced that it will launch its Centennial year with the return of On the Table on Tuesday, May 12: the Trust’s 100th anniversary. An imaginative public square designed to improve communities across the region, On the Table brings together thousands of Chicago-area residents in small groups to share a meal and discuss ways they can work together to make our communities stronger, safer and more dynamic.

On the Table 2015 begins a yearlong campaign during which the Trust will celebrate philanthropy in all its forms—giving of time, treasure and talent. Registration is now open at www.onthetable.com.

During the inaugural On the Table initiative last year, nearly 11,500 Chicagoland residents—representing every Chicago neighborhood and residential zip code, as well as 11 area counties—shared their ideas and sounded a call for more collaboration, commitment and civic engagement throughout our region. This year’s mealtime conversations are designed to answer that call and spark a movement to inspire even more residents to get involved for the benefit of our community and its future.

“During On the Table 2015, we are asking participants to share the stories of how they are already making a difference and improving our communities, as well as to explore how they work collectively or independently to inspire others to do the same,” said Terry Mazany, president and CEO of The Chicago Community Trust. “Our Centennial vision is ambitious. We want to spark a civic movement that will make the Chicagoland region the most philanthropic in the nation—On the Table is an important step toward this goal.”

The premise of On the Table 2015 remains the same. The topics, issues and ideas discussed during each conversation will be completely organic and driven by participants’ interests and perspectives, as well as the opportunities and challenges in their community that are most important to them. Mealtime conversations can take place in homes, backyards, at local restaurants, schools, community centers, places of worship, libraries, offices, retail establishments—literally anywhere a host chooses. They can be sit-down, catered, picnic or potluck—completely up to each host.

On the Table harkens back to The Chicago Community Trust’s founding nearly a century ago, when Chicago bankers Albert and Norman Harris hosted similar mealtime conversations during which people who cared about the region determined to combine their philanthropy to maximize their charitable impact. Since its founding in 1915, the Trust has awarded approximately $2.3 billion in grants to thousands of local and national nonprofits, including $164.5 million in 2014.

On the Table is made possible through the financial support of corporate sponsors, including the Knight Foundation, Mr. and Mrs. Marshall Field V, Sun-Times Foundation and U.S. Bank. The project Steering Committee is co-chaired by Leslie Bluhm, founder of Chicago Cares, and Mary Richardson-Lowry, partner at Mayer Brown LLP, who are both also members of the Trust’s governing board.

For more information or to sign up to participate as an On the Table host or a guest, visit www.onthetable.com, call 866-737-6951 or join the conversation on social media using the hashtag #onthetable2015.