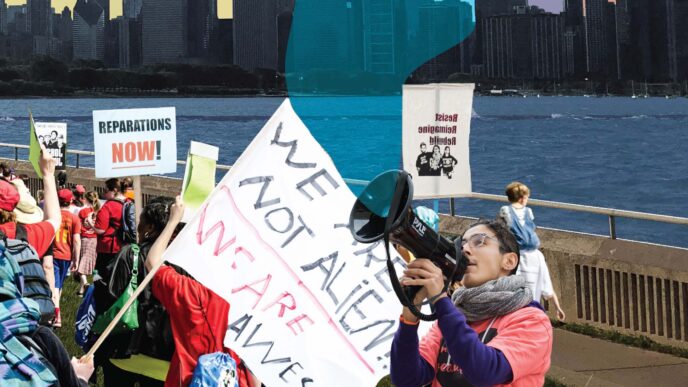 (CHICAGO, August 2, 2022) – The Institute for Research on Race and Public Policy at the University of Illinois at Chicago is releasing a report that challenges past narratives suggesting Chicago’s civic life is precarious. The report offers a broader analysis of civic life using a racial equity lens. According to the analysis, race and class differences in civic engagement disappear or reverse when including a wide range of less formal activities and forms of collective organizing practiced among Black, Latinx, and working-class people in Chicago.

Since the 1960s, traditional measures of civic engagement have shown declining rates of civic health. These accounts of civic decline often focus exclusively on voting and donating one’s time, talent, and income to traditional nonprofit organizations. The report provides new ways to assess civic life in Chicago, including participation in social movements like the immigrant rights movement, the growth in the number of nonprofits established, and social cohesion as captured through the hosting of block parties.

“The report highlights the importance of understanding what drives people to become civically engaged and how to address the barriers that prevent participation,” said Maritza Bandera, program manager for the Building Collective Power strategy at The Chicago Community Trust, which supports community organizing, networks, and coalitions leading grassroots change in their neighborhoods. “The more residents are involved in civic life, the healthier our democracy, the more vibrant our communities.”

Racial inequities and the practices and policies that reinforce them shape how Black and Latinx communities choose to engage in civic participation. For example, the report highlights an interview with a student who was inspired to get involved in politics by his social studies teacher running for City Council. Once the campaign ended, the student continued to work in his community, initiating an immigrant defense network and, after graduating, ran for an LSC community representative position at his high school.

“Over the last seven years, our work has allowed us to collaborate with a host of community-based organizations deeply invested in driving action that meets the needs of their communities,” said Iván Arenas, associate director at the Institute for Research on Race and Public Policy at the University of Illinois at Chicago. “By incorporating the voices of community organizers into our analysis, we hope to broaden the discussion of what counts as civic engagement and better understand how to encourage it.”

Key findings from the report include:

Through interviews and analysis of nonprofits in Chicago, the report captures the perspective of organizers, academics, and funders who provide their unique perspectives on the state of civic engagement in Chicago. By framing civic engagement through a racial equity lens, the report provides a broader view of civic participation that can be used to catalyze and drive action.

Recommendations to inspire action include:

“Changing the Frame” was commissioned by The Chicago Community Trust to assess the state of Chicago’s civic health a decade after the 2010 Chicago Civic Health Index report. For the complete analysis of civic engagement, the institutional inequities, and government policies shaping these patterns and insights into the vibrant and resilient forms of engagement practiced among Black, Latinx, and working-class people in Chicago, visit: Changing the Frame: Civic Engagement Through a Racial Equity Lens.

About The Chicago Community Trust
The Chicago Community Trust is a community foundation dedicated to strengthening the Chicago region by creating equity, opportunity, and prosperity for all people who call it home. For more than 100 years, the Trust has united generous donors, committed nonprofits, and caring residents to effect lasting change. Following creating a new strategic plan in 2019, the Trust stands committed to addressing Chicago’s legacy of systemic inequity and closing the racial and ethnic wealth gap while responding to our most vulnerable residents’ critical needs. Thanks to our generous donors, in the fiscal year 2021, more than 7,000 organizations received more than $1.4 billion in funding from the Trust and affiliated donor advised fund programs. To learn more, visit www.cct.org.