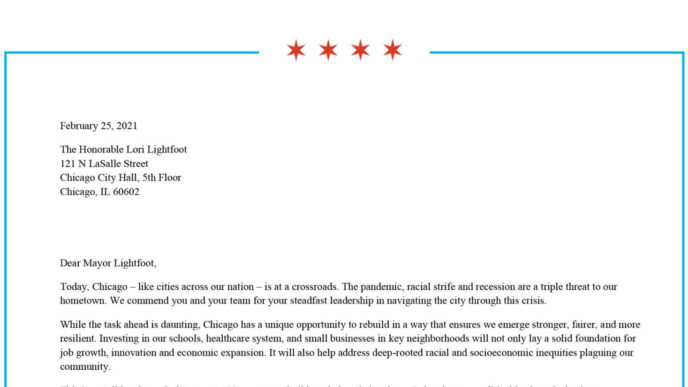 CHICAGO (February 25, 2021) – Leaders from some of Chicago’s largest businesses and civic organizations released a letter today to reaffirm their commitment to the city and pledged to be collaborative partners with all of its stakeholders to ensure an equitable and inclusive recovery, in partnership with The Chicago Community Trust and its initiative, Together We Rise: For an Equitable and Just Recovery.

The letter, which was drafted and first circulated by Chicago-based investment firm The Vistria Group, includes signatures from nearly 60 executives representing a variety of organizations in the city’s law, nonprofit, health, consulting, and finance industries, among others.

“We believe in Chicago and the individuals who signed this letter are just a reflection of the many that are already engaged in an effort to help their community.  We’re certain more will be signing on as Chicago continues to rise,” said Kip Kirkpatrick, co-CEO of The Vistria Group. “Those represented by this letter today, as well as the many more who will be represented in the future, welcome the task and challenges that lie ahead and will be partnering with the City and The Chicago Community Trust on the initiative, Together We Rise: For an Equitable and Just Recovery. Together, we will build back in an equitable way.”

Citing racial strife, the economic downturn and ongoing COVID-19 health crisis, the signatories emphasize the need for partnership amongst business, government, civic, religious, and nonprofit organizations to build a better future. Through in-kind or financial contributions, the signatories are aligned with efforts to increase employment, strengthen small business, and spur catalytic development in underdeveloped neighborhoods.

“Chicago is the greatest city in the world and that’s thanks to its people,” said Marty Nesbitt, co-CEO of The Vistria Group. “As residents and civic leaders, we are committed to partnering with our city and state leaders, our partners in the business community and our civic organizations to ensure a robust and equitable recovery. We commend Mayor Lightfoot for her steadfast leadership throughout this turbulent time.”

The letter builds on the Together We Rise: For an Equitable and Just Recovery initiative, which was announced last October to unite partners across the Chicago area to tackle the disproportionate impacts of COVID-19 and the deep-seated inequities amplified by the pandemic.  Led by The Chicago Community Trust, the initiative consists of three complementary parts:

“In this city of broad shoulders, we are inspired by the commitment of these business leaders to align their practices to advance inclusive opportunity,” said Gloria Castillo, director of the Together We Rise: For an Equitable and Just Recovery initiative at The Chicago Community Trust. “Our work to advance equitable economic growth requires partnership across philanthropy, business and communities and we look forward to working with these business leaders to reimagine our city’s future.”

Signatories of the letter as of February 24, 2021 include: