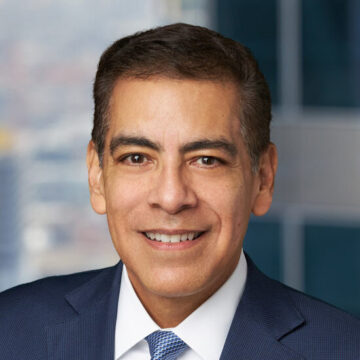 Jesse Ruiz is a Partner, General Counsel and Chief Compliance Officer of The Vistria Group, LP, a next generation private investment firm focused on investing in middle market companies and delivering both financial returns and societal impact.

Prior to joining Vistria, Jesse was the Deputy Governor for Education in Illinois Governor JB Pritzker’s administration, overseeing the state’s education system from early childhood through higher education, as well as the Illinois Student Assistance Commission and the Abraham Lincoln Presidential Library and Museum. Jesse was also legal counsel to Governor Pritzker’s transition committee. Before joining the Pritzker administration, Jesse was a partner in the Corporate & Securities Group of Drinker Biddle & Reath LLP (n/k/a Faegre Drinker Biddle & Reath LLP). For 22 years at the firm, Jesse focused his practice on middle-market mergers and acquisitions and commercial transactions. Throughout his legal career, Jesse has also dedicated time to public service. He served as President of the Chicago Park District Board of Commissioners, Commissioner on the Public Building Commission, Vice President of the Chicago Board of Education, Interim CEO of Chicago Public Schools, Chairman of the Illinois State Board of Education, Commissioner on the U.S. Department of Education Equity and Excellence Commission, Commissioner on the Illinois Supreme Court Character and Fitness Committee, and Commissioner on the Chicago Public Schools Desegregation Monitoring Commission.

Prior to beginning his law practice, Jesse was an associate in the Operations Management Group of Booz Allen & Hamilton (n/k/a Strategy&). Before law school, Jesse was a member of the sales departments of Ryerson Coil Processing Company and the Inland Steel Company.

The son of Mexican immigrants, Jesse is a life-long Chicagoan and is married to fellow attorney and University of Chicago Law School alum, Michele Ruiz. They have two sons, Jonathan and Benjamin.