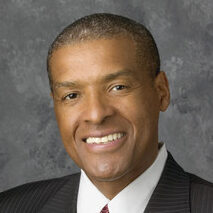 James “Jim” Reynolds, Jr. is the founder, chairman and chief executive officer of Loop Capital. He currently serves on the boards of buildOn, Chicago United, Get IN Chicago, Skills for Chicagoland’s Future and The University of Chicago Medical Center. Additionally, Reynolds is vice-chair of the Chicago Urban League and a member of the CFA Institute. In 2013, he was chosen by Mayor Rahm Emanuel to co-chair Get IN Chicago, which aims to prevent violence through intensive mentorship and intervention in the lives of at-risk youth. Previously, Reynolds was appointed to serve on the boards of World Business Chicago and The Illinois Sports Facilities Authority by the Mayor Emanuel in 2011. He holds a Masters of Management in Finance from Northwestern University’s Kellogg Graduate School of Management and a B.A. in Political Science from the University of Wisconsin, La Crosse.  He is also a chartered financial analyst.

Appointed in 2016 by the Trustees Committee.